As part of the donation project, Firestone Liberia renovated the main hospital building, including the triage area, isolation building, maternity building and also constructed an incinerator and latrine and bath facility.

The community of Owensgrove, through its leadership team, headed by Harry O. Artis, the commissioner of Owensgroove district, requested assistance from Firestone Liberia to rehabilitate their medical clinic facility situated near the Farmington River separating Margibi and Grand Bassa Counties. After visiting the location and recognizing the urgent need and importance of the project, Firestone Liberia committed to support the renovation of the community clinic compound, which now serves patients in both Grand Bassa and Margibi Counties.

“We look forward to seeing the rehabilitated Owensgrove Community Clinic successfully serving the medical needs of the community and surrounding areas, and are grateful for having the opportunity to be a part of this very important community support project,” said Raymond Gwenigale, Director of legal Affairs and Communications.

“My office wrote Firestone Liberia for assistance and this is what they did for us! Although Firestone is not located in Grand Bassa County, they responded to our call. I want to say a big thank you to Firestone Liberia for the work, as we can all see. Your work is not in vain, it is in the positive interest of Margibi and Grand Bassa counties,” said Owensgroove Commissioner Harry O. Artis. 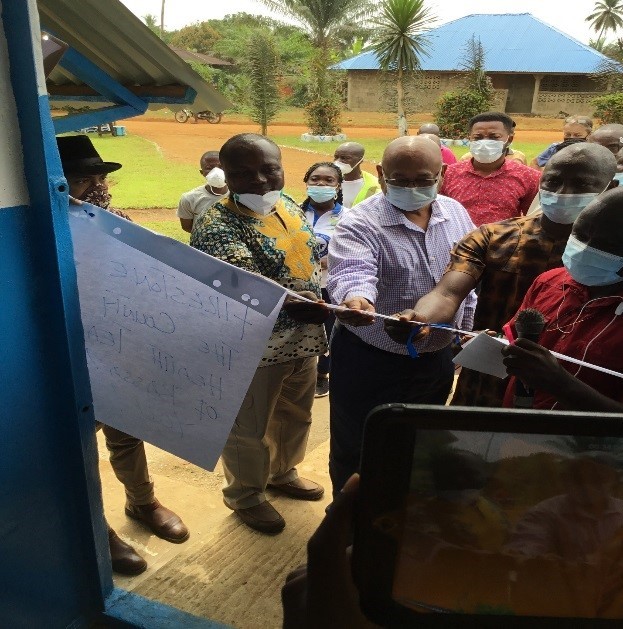 The cutting of the ribbon of the new facility by Grand Bassa County Senator Jonathon Kaipey, Patrick Rodrigo, Director of Operations, Firestone Liberia, and other local county officials

In attendance at the ceremony marking the grand opening of the new clinic was Grand Bassa County Senator Jonathan Karpee, who characterized the project as a major milestone achievement for the people of Owensgroove, Grand Bassa County.

“Today, we see the manifestation of true corporate partnership, and on behalf of the legislative caucus of Grand Bassa County, the citizens, and all who will benefit from this clinic, we want to give our appreciation to Firestone Liberia for this initiative,” said Senator Jonathan Karpee.

Speaking at the ceremony on behalf of the Ministry of Health & Social Welfare for the Republic of Liberia, Assistant Health Minister Gorbee Logan expressed gratitude to Firestone Liberia for the donation and ongoing support of healthcare in the country.

“Prior to constructing all these medical units, we just had a little clinic that was basically a mud structure; Firestone Liberia broke it down and made it modern. They also built for us a much needed maternity unit. We thank Firestone Liberia for this effort to restore hope to our people,” said Assistant Health Minister Gorbee Logan.

Firestone Liberia views the wellbeing and health of community members as a vital part of the further development and progress of Liberia. As a partner with the government and people of Liberia for 95 years, Firestone Liberia remains committed to doing its part to assist and promote vital community projects, such as renovating the Owensgrove Community Clinic, which in turn advance healthcare and development of the Liberian people.